When I first started this blog I was trying to learn about the different types of puukko and one of my favorites was the Rautalampi. I contacted Arto Liukko who is a puukkoseppämestari and master of this style of puukko. He wrote the history of the Rautalampi which is featured here: Rautalammi

Now I would like to present  a little background about Arto and show some of his beautiful work here for you to enjoy.

Arto has been engaged in crafts since childhood. Some of the toys he used as a boy were handmade by him, mostly with a knife. In 1986 his daughter, a music teacher asked about a blacksmith capable of crafting knives to cut and maintain oboe reeds. Once asked, Arto considered the possibility of making them himself, but before starting he asked blacksmith Leo Lappalainen to teach him the basics of forging and heat treatment. So started his knife making.

In 1989, while looking at a book about puukkos, he saw a photograph of a Rautalampi puukko crafted by Emil Hänninen and was bewitched. He then started to research other specimens, visiting museums and taking measurements of every preserved Rautalampi puukko. The puukko making flame was ignited.

In 1994 he participated with a Rautalampi in the Fiskars puukko competition and won the gold medal, creating a stir, for nobody was thinking the Rautalampi would be resurrected from the ashes. In 2009 he was one of the seven knifemakers to pass the exam to become puukkoseppämestari. (His son Jari, also featured on this blog followed in his father’s footsteps becoming a puukkoseppämestari in 2018.)

While initially he didn’t consider teaching, Arto now does occasionally tutor other makers. Two years ago he was the teacher in Rautalampi crafting for fellow bladesmiths Tapio Syrjälä, Mikko Inkeroinen, Eero Kovanen and Marko Lindelä. Untill retirement Arto has been the organist in Savonlinna’s minster and, when needed, also for smaller towns surrounding the city.

There is no particular puukko tradition in Savonlinna, but nevertheless Arto conceived and crafted the Linnapuukko, which cast pommel is fashioned as the Olavinlinna castle keep.

His other hobbies, shared with his son Jari, are hunting and fishing. In addition to this he also sings and is leader of a church choir. Until retirement Arto was the organist in Savonlinna’s minstery and when needed, also for smaller towns surrounding the city.

His intention for the future is to keep crafting puukkos as long as he is able to. 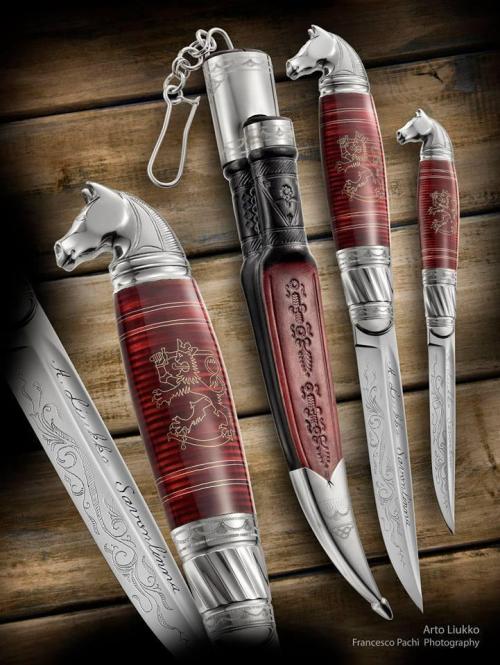 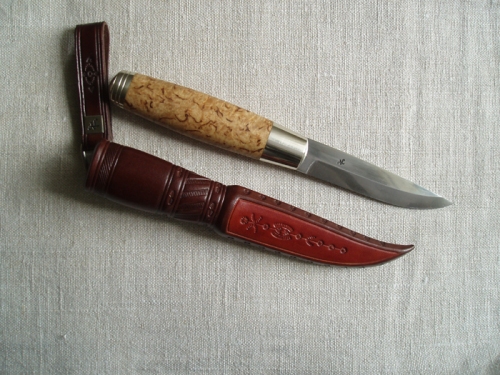