“I’m from the rural area of Southern-Savonia,the former municipality of Virtasalmi, that is part of municipality of Pieksämäki nowadays. Usually, puukko is a very common tool in daily tasks in the Finnish countryside and young people are taught to use it at an early age. My first memory of puukko, that has been imprinted on my mind as a small child, was a miniature puukko from Kauhava my father showed me. He had gotten it as a gift when he was a child. It sure pleased the eye of a young boy with its shiny blade and noble looking horse headed rear bolster. When I was 6 years old I got my first knife, a small folding knife and that was probably the first knife I tried whittle with. When I reached age of 14 I started hunting and that’s how I got more familiar with the puukko and, instead of casual whittling for fun, I also got to experience handling game with it and so on.

My true interest in Finnish puukkos started when I was studying in artisan crafts school in Mikkeli. I found out that forging steel was my “thing” because what could be a more interesting object to forge than a blade, I developed a passion for making puukkos. My first puukko blades however resembled something like a cross between screwdrivers and butter knives, but as time went by, my skills started to improve. When I was 17, I got my own gas operated forge in my home.

In the third year of artisan craft school, when students got more chances to do their independent projects, I specialized in forging and my views toward puukkos and their shapes got more detailed. I’m thankful for my teachers Mr. Murto and Mr. Piiroinen who taught me the many ways of handling steel as an material.I also received very important information and details from well-known puukko smith Mikko Inkeroinen, who was a regular visitor in our school’s workshop. Thanks to him, I developed a special interest in traditional shape of puukko blades.

I live in town of Pieksämäki today, but I still visit my childhood home almost daily where my workshop is located as well as my main job in father’s company of canning and smoking game meat.

Most knives I’ve been making now are Tommi, maasepänpuukko, karjalanpuukko, housewife’s knife and kuosmalanpuukko. Karjalanpuukko is one of my favourite puukkos, it’s based on early 20th century’s eastern-karelian knives in the collection of The Finnish National Museum. As far as I know, I’m the only knife maker in Finland to make them today. Kuosmalanpuukko carries the name of my home village Kuosmala. It’s designed by me as an tribute for Kuosmala, there is no previous known puukko model in this area, so I’m proud of having created one.

I’ve also started to gain more interest toward factory made puukko design of the 1930-1950’s era. I make my blades mostly from old files and springs, like black smiths in the countryside of Finland traditionally used to do. But just like in everything, it’s good to broaden our views, so I’m planning on testing synthetic materials for grips in the near future.

As a knife maker, my goal is to improve my skills and learn more and more as well as expand my knife making, which is the thing that keeps the passion high.” 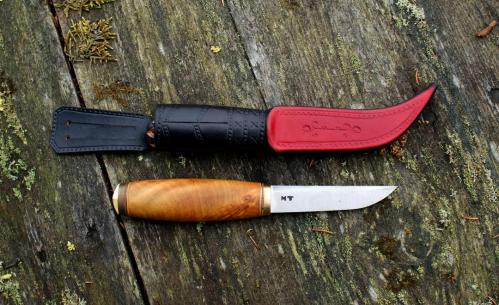 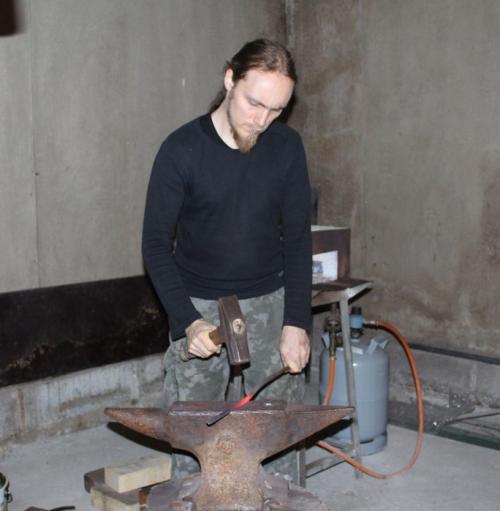 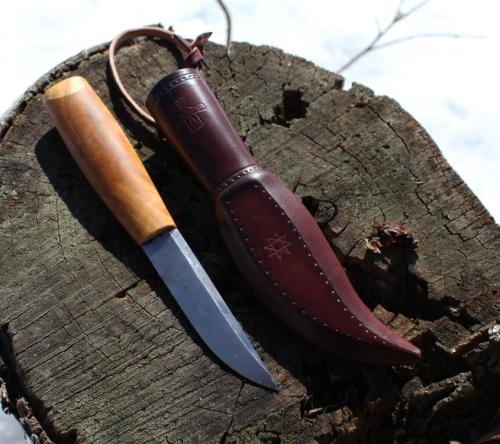 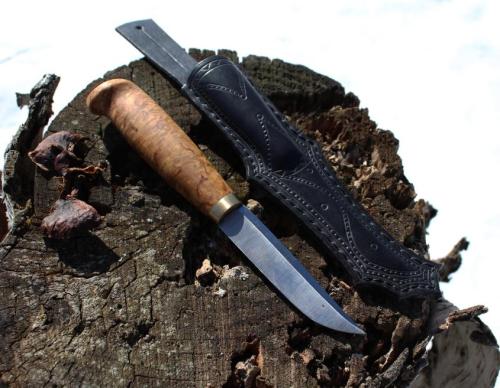 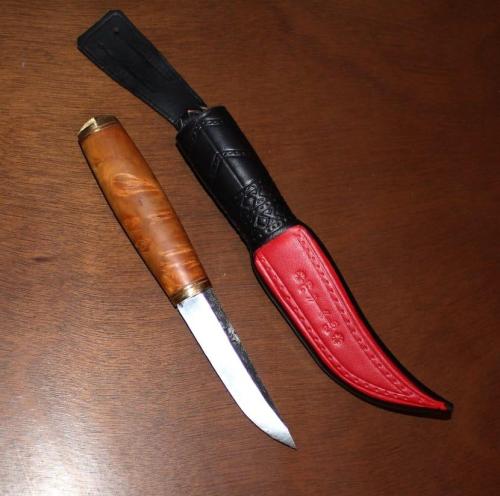 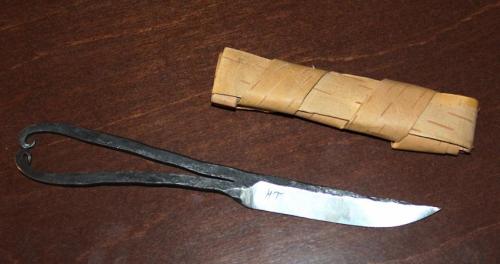 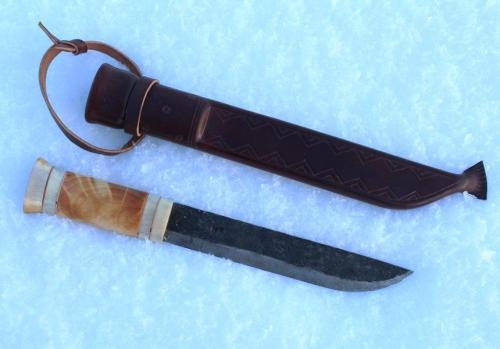 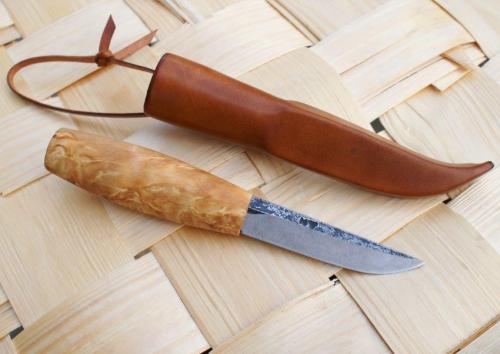 This puukko was hand made by Finnish knifemaker Tommi Mäkelä, who works full time for Lauri Metalli Oy in Kauhava.

The blade is a modified Lauri PT blade, so to give it a very subtle rhombic section. It isn’t tapered in height nor in thickness, while the sides are lightly sanded towards the spine and the bevels are thinned down to a more acute angle. As for all PT blades, the bevels went through induction hardening so to achieve 64 HRC at the edge. The bevels are ground to 17 ° and the edge has a tiny micro bevel.

The handle is made of birch bark discs compressed between bronze bolsters, a Lauri made 3 mm thick front one and a self made 4 mm back one. The handle was then heated in oven so to allow the bark oil to glue all together. It’s sanded to a fine grit and it’s tapered in width and thickness towards the blade, with the pommel higher than the bolster and the thickness diminishing from the center towards the blade. It has an subtle teardrop section, and fills well the hand.

The sheath was hand stitched from 1.8 mm thick cowhide. It has a birch protective liner, the blade slot was carved then the outer shape was sanded. The belt loop is fixed with a bronze ring, The loop itself is closed by a brass rivet. 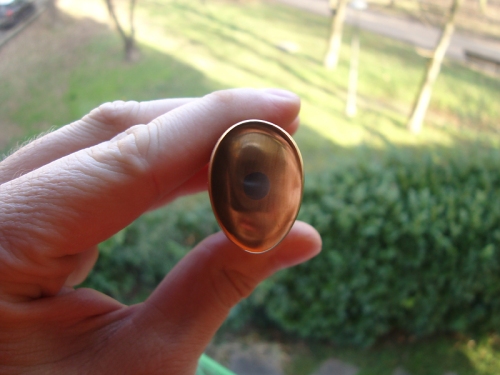 When it first arrived it was hair popping sharp, though, since I felt the edge was slightly rough in few points I stropped it a little with both black and green compound.

Let’s start with our usual spikkentroll, this time from a piece of plane wood. There isn’t much to tell about this, since the puukko had always a great bite for roughing cuts and good nimbleness for refining ones. Nothing to say about the handle other than just plain comfortable. At the end of the work I felt two very tiny microchips in the first half of the edge, which also lost some bite, but still managed to shave. I just gave it a quick strop with green compound.

During the carving of the silver fir spatula the puukko again proved to have a great attitude as a wood carving machine. Again I experienced a great deal of bite, a good nimbleness and precision. Surely it’s one of the fastest carvers I have, the only moment in which it struggled a little was when finishing the roughing of the belly between the spreader and the shaft. No problem with the handle whatsoever. At the end of the work the edge was pristine, the bite was lower but still able to shave.
Same feelings during the finishing cuts, though the loss of bite was perceivable when doing planing to adjust the thickness and wideness of the shaft. At the end of the work the edge was still pristine and was still able to shave, but needing more pressure to be applied. 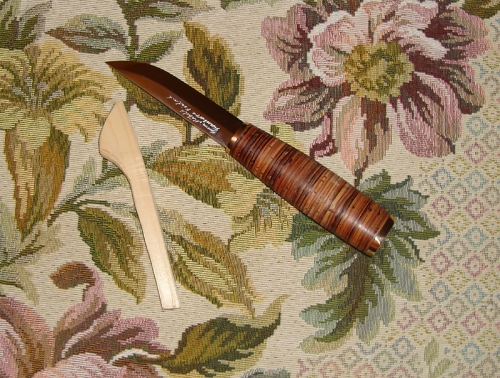 Given the rather thin stock, the acute edge and the very high edge hardness it’s not surprising that the edge is slightly prone to microchips, though I got some only when carving though knots. Generally speaking I was extremely positively impressed by the resilience and edge holding this combination of geometry and heat treatment managed to pull off. The edge holding is comparable to the one I have on other puukkos in the same steel, but with a 20-21° edge and a final hardness of 62 HRC.
The handle, though a bit shorter, but not slimmer, than what I’m normally used to is very comfortable and allows the puukko great agility and nimbleness. Plus it’s tapered towards the blade starting from a rather generous pommel, allowing for a good deal of power and effective leverage when carving with chest lever grip.
So, to sum it up, this puukko is smaller than the majority I’ve tried and handled and, being so much carving oriented, I don’t really see it as a single tool for bushcraft, in its most recent concept of searching for a “one tool option”. But it will get you plenty covered for anything wood working related, being a spoon or a pot hanger.