This post is about a puukkoseppä that was introduced to me by Tapio Syrjälä. I was curious about what Tapio was up to and the next post will show his latest knives and bring you up to date with his work, but first I would like you to take a look at the puukko of Danijel Haramina. He makes beautiful puukko of traditional and also modern materials. His work is very accomplished for a puukkoseppä who has only been working for a few years.  Here is some information from Danijel  and a link to his website  Malanika.com I hope you will enjoy his work as much as I do.

“I live in a small village, Tuhelj in northwest Croatia. I was a hunter for 12 years and all that time I was searching for the “ideal” knife.
In the winter of 2013 I found bladesmith Karlo Ban ( Karlo ban website) and I asked him to make a blade for me. He made me a puukko blade, in three layer construction with silversteel core.

I made the handle by myself, that was my first handmade knife and by then I was falling in love with puukkos. Very soon my friends started to ask me to make knives for them and that is how I started. I also made a couple hunting knives but puukkos became my only interest in knife making.

I have learned a lot from Karlo Ban who sold me the first blade but I also study the work of Finnish makers like Pekka Tuominen, Tapio Syrjälä, Joonas Kallioniemi, Passi Hurttila and others. I use mostly 52100, it is my favorite steel and sometimes 80crv, but I plan to start with some stainless steels in the future. Some of my puukkos are forged and some just stock removal. I know that I have a lot more to learn and I hope I will.

There is no traditional sort of knife here where I live. My favorite type of puukko is maasepän, because it is so simple and light and at same time beautiful, just like a puukko must be. I have three of them, use them hunting, in the kitchen, the workshop, everywhere and now I’ll make a fourth for myself.

My second hobby is hunting, I enjoy spending lot of time in woods and I’m happiest when I have a chance to use my puukko. In the last year I’ve been making knives full time and I can say that I have most beautiful job in the world.” 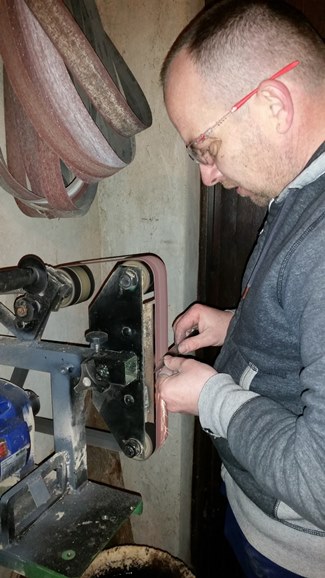 Some photos of Croatia where Danijel lives:

Veliki Tabor is a castle and museum in northwest Croatia near where Danijel live. It dates back to the 12th century. http://www.veliki-tabor.hr/en/ 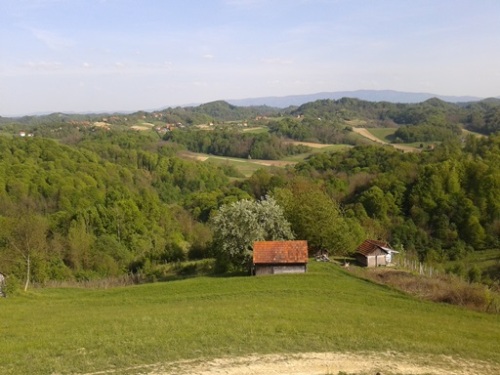 Now enjoy a look at Danijel’s work! Thank you Danijel. 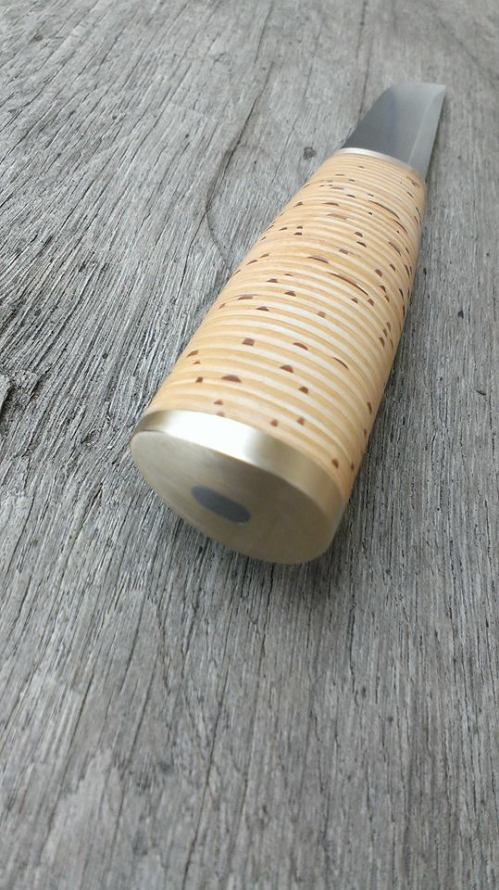 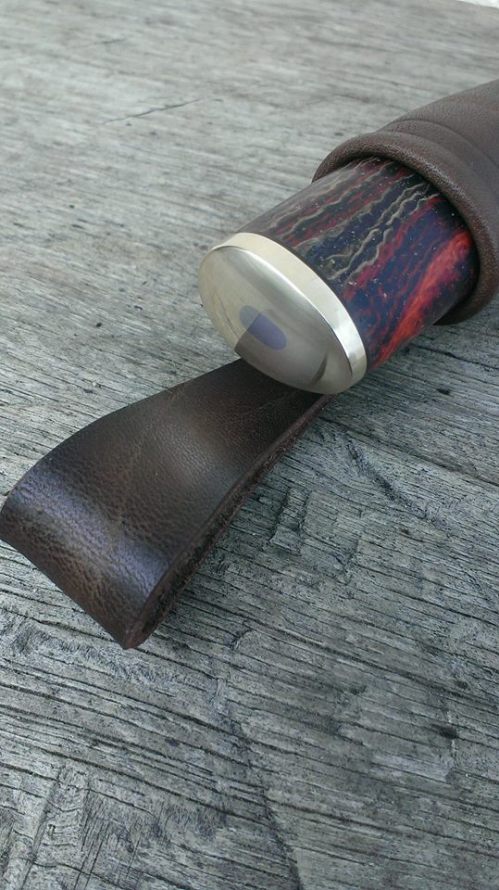 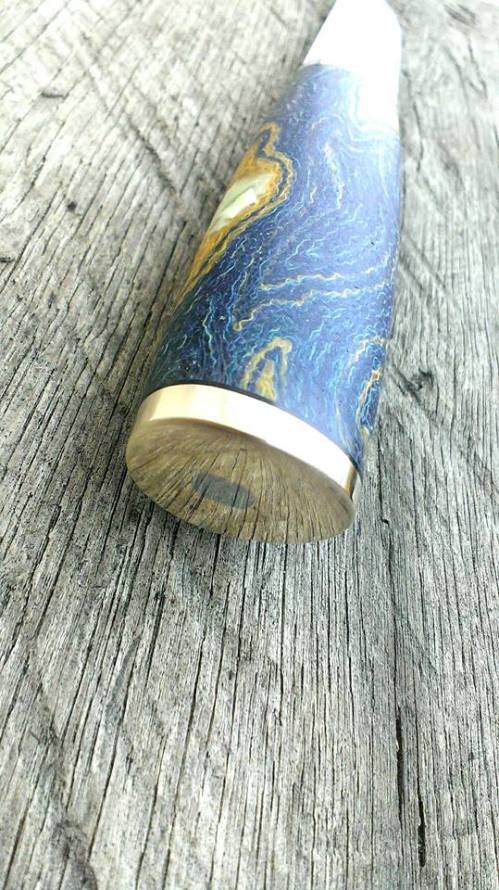 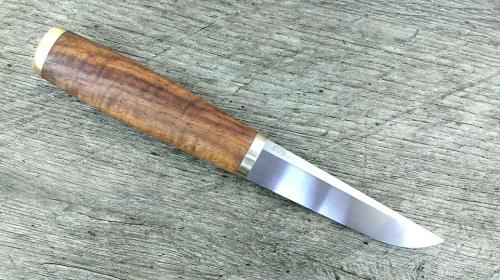 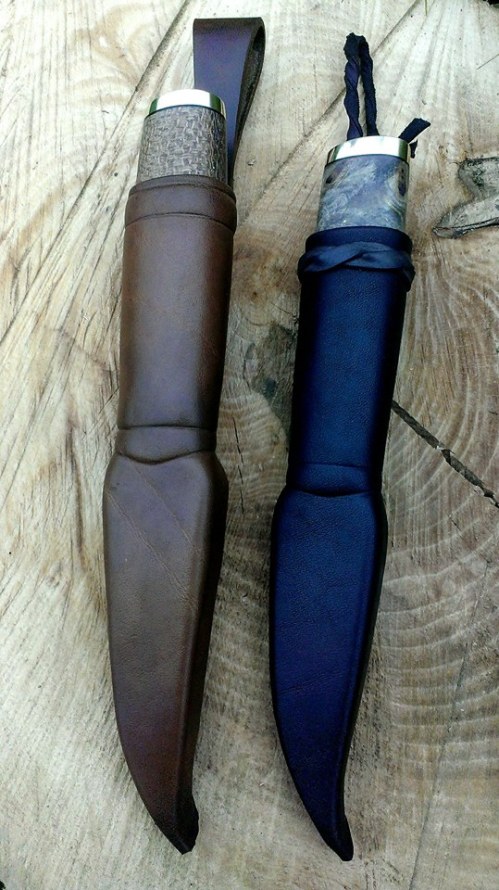 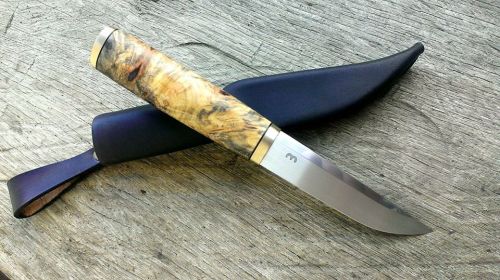 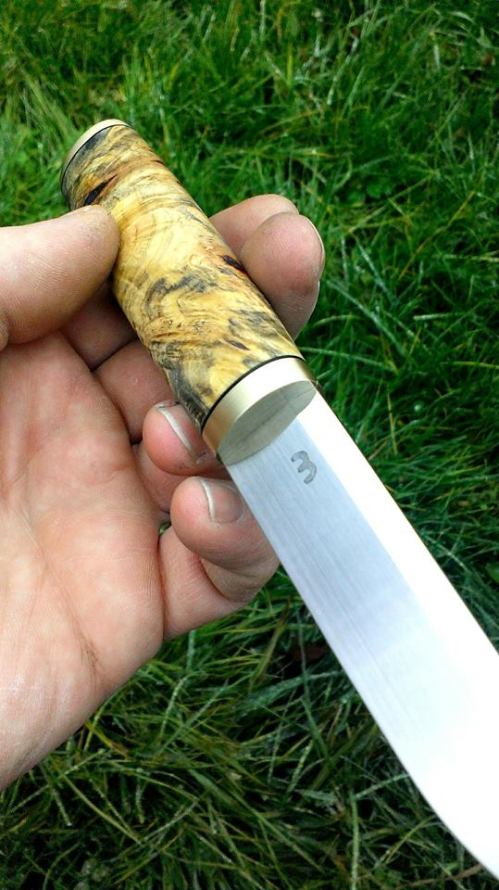 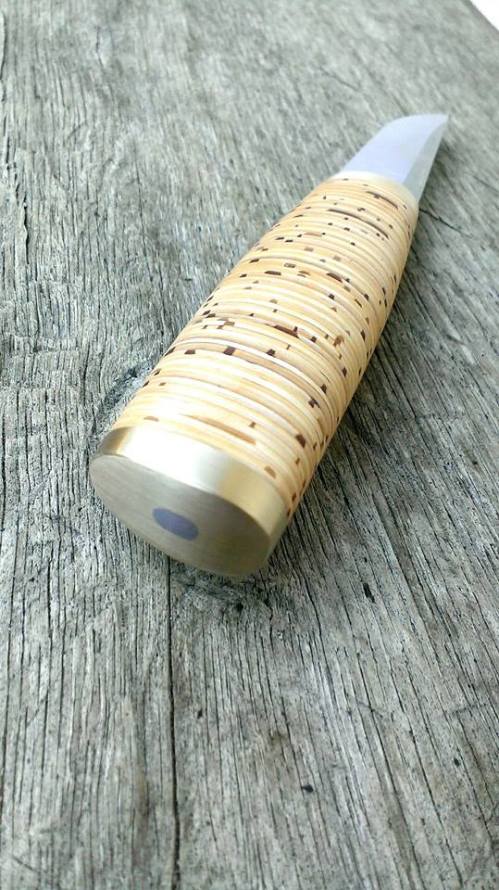 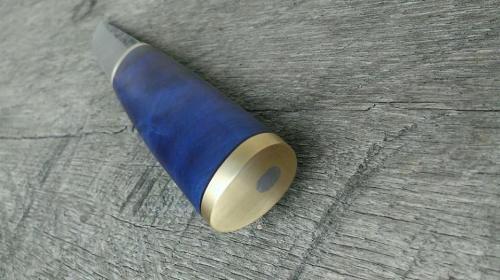 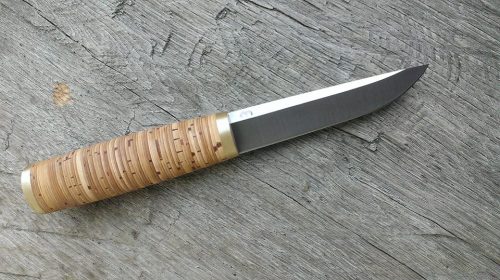 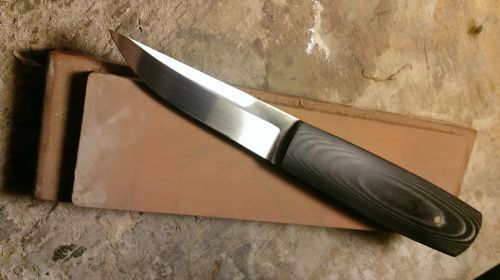 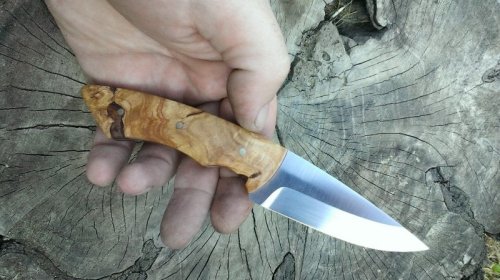 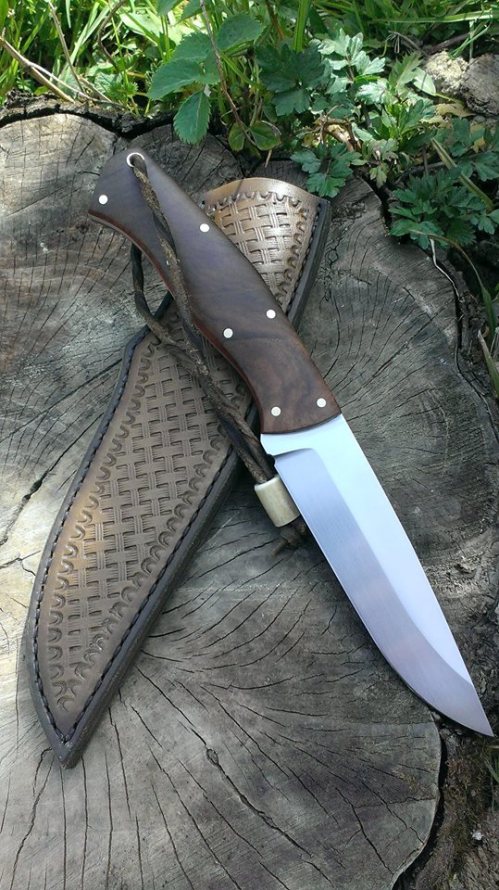 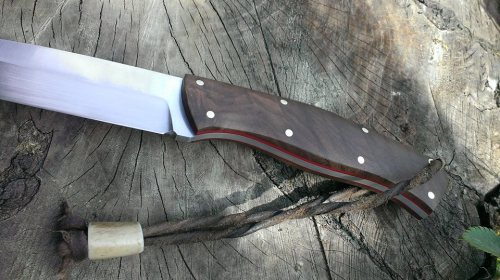 The region of Southern Savonia is in the heart of the Finnish lake district, where the Saimaa creates its labyrinth of water and land. It’s the largest lake of Finland with its 4 380 km2 surface, 13,710 islands and 14,850 km of shores. On its islands many historical buildings were built, here are just few examples.

The St.Olaf Castle of Savonlinna was built in 25 years by the citizens and completed in 1475. Due to the habit of preserving food under layers of salt and despite being over a freshwater lake, the castle was guarded by beer fueled soldiers, or so is told. It was abandoned in 1840 after three wars between Sweden and Russia and brought back to life in 1912 with the creation of the International Opera Festival. 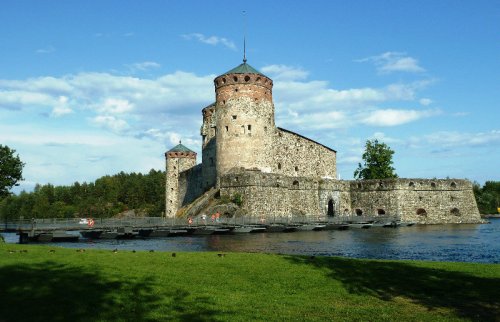 The Kerimäki wooden church, the biggest one in the word, can hold 5000 people. The parishioners used to reach it by boat.

The New Valamo orthodox monastery was originally built in the 12th century on lake Ladoga, in the now Russian part of Karelia. After the Winter War the monks moved to west and built a new monastery in Heinävesi.

Aside from man’s works, lake Saimaa is a natural treasure in itself and holds, among other species, one of the three living freshwater seals: the critically endangered Saimaa ringed seal. 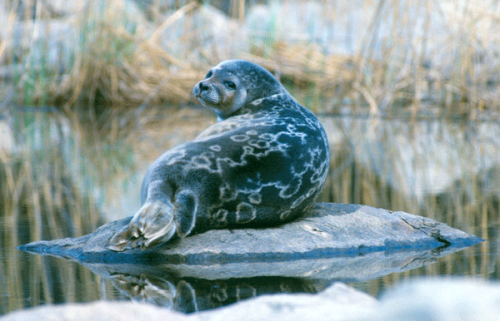 The wetland environment, paired with the deciduous forests, is the ideal place for the summer nesting of the golden oriole. This reserved yet active bird, whose male sports one of the most melodious voices among European birds has become one of the regional symbols of Southern Savonia.

Blacksmith Martti Malinen, working in Niinisaari island, crafts, among the others, a puukko named after this bird: the Kuhankeittäjä.

“For me the bird itself has been the source of inspiration. My summers here are hectic because of number of tourists. And they all want to get my knives or other products from the local blacksmith! My hobby has been to have a cup of coffee on the entrance door of the workshop and talk to Oriolus (I use Latin name often) for fun. He answers and flies to me when I imitate him. They nest here on our yard. Few years ago I wanted to do something different after a number of koivumäki and other normal knives. Something which have more colours and have a message from summer.

During a day off from workshop I took my family for a short boating trip to our sauna cabin 10 km from here. Just before we arrived back we met a ringed seal. I stopped the engine and he dived closer to the boat. Finally he was ten meters from us. One of the most endangered mammal in the world! Perhaps the next knife will have colours from the ringed seal…” 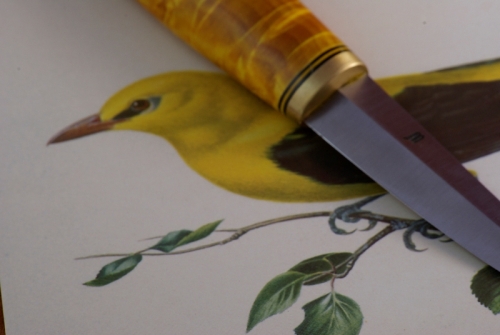 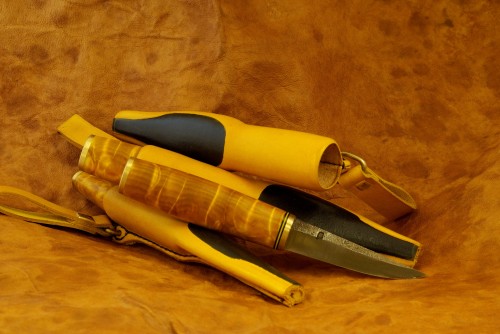